Castleman’s disease is an uncommon lymphoproliferative disorder characterized by benign tumours that develop in the lymph nodes. Most often, they occur in the neck, chest and/or abdomen but may also be found in the axilla, pelvis, and pancreas. The disease is associated with human herpesvirus type-8 (HHV-8).

Castleman’s disease is divided into four types, based on histology and location.

The first two are determined by the microscopic appearance of the lymph node:

The remaining two types are defined by the number of anatomic regions affected:

We describe a patient with a combination of these microscopic and anatomic variants. 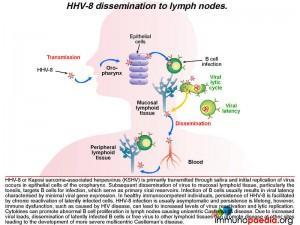 Initial transmission and dissemination of disease to the lymph nodes

Human herpesvirus type-8 (HHV-8) or Kaposi sarcoma-associated herpes virus (KSHV) is primarily transmitted through saliva. The virus initially replicates in the epithelial cells lining the oropharynx and then disseminates to local mucosal lymphoid tissue, in particular the tonsils. The virus targets B cells as its primary reservoir resulting in viral latency with minimal viral gene expression.

When the host is healthy with intact immune function, persistence of HHV-8 is facilitated by chronic reactivation of latently infected cells.  Resulting infection is typically asymptomatic and viral persistence is life long.  However, in people who are immunodeficient, such as in individuals who are HIV positive, their immune dysfunction can lead to increased levels of HHV-8 reactivation and lytic replication.

Release of cytokines can promote abnormal B cell proliferation in lymph nodes with a localized distribution, known as unicentric Castleman’s disease. Increased virus replication, as a result of loss of immune control, can lead to the dissemination of latently infected B cells or free virus that infect multiple lymph node sites resulting in multicentric Castleman’s disease.

In order to better understand how viral latency is established we need to look in greater detail at the infection of naïve B cells and how they bypass the germinal centers of secondary lymphoid organs. 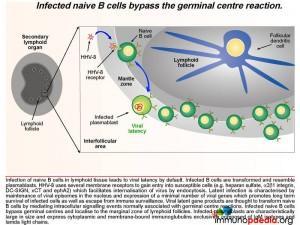 Viral infection of naïve B cells in lymphoid tissue leads to viral latency. These infected B cells are transformed and resemble plasmablasts, but do not secrete immunoglobulins. HHV-8 uses several membrane receptors to gain entry into susceptible target cells including heparan sulfate, a3b1 integrin, DC-SIGN, xCT and ephA2.  These receptors facilitate internalisation of the virus via endocytosis. Latent infection is characterised by maintenance of viral episomes in the nucleus and expression of a minimal number of viral genes which promotes long term survival of infected cells and escape from immune surveillance. Viral latent gene products are thought to transform naïve B cells by mediating intracellular signaling events normally associated with germinal centre reactions. However, the virus infected naive B cells actually bypasses the germinal centre and localizes to the marginal zone of lymphoid follicles . (See histology image in “investigations” section)

The infected plasmablasts located in the mantle zone are characteristically large in size and express cytoplasmic and membrane-bound immunoglobulins exclusively composed of IgM isotypes and lambda light chains. The characteristics of these plasmablasts and their resulting pathology are described in greater detail in the next two graphics. 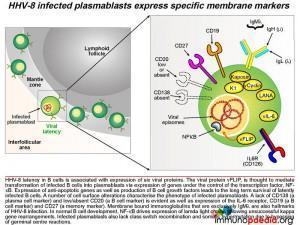 HHV-8 latency in B cells is associated with expression of six viral proteins (Kaposin, K1, vCyclin, LANA, vIL-6 and vFlip). The viral protein vFLIP, is thought to mediate transformation of infected B cells into plasmablasts via expression of genes under the control of the host transcription factor NF-kB. Expression of anti-apoptotic genes as well as production of B cell growth factors (under the control of NF-kB) leads to the long term survival of latently infected B cells. A number of cell surface alterations characterize the phenotype of infected plasmablasts.  A lack of CD138 (a plasma cell marker) and low or absent CD20 (a B cell marker) is evident as well as expression of the IL-6 receptor, CD19 (a B cell marker) and CD27 (a memory marker). Membrane bound immunoglobulins that are exclusively IgM (heavy chain) and lambda (light chain) are also hallmarks of HHV-8 infection. In normal B cell development, NF-kB drives expression of lamda light chains following unsuccessful kappa gene rearrangements. However, viral infection occurs subsequent to complete immunoglobulin receptor formation, thus we see the exclusive expression of lamda light chains in infected cells.  Although this process is not well understood, it is thought to be caused by viral induction of NF-kB transcriptional activity.  Infected plasmablasts go on to lack class switching recombination because they bypass the germinal centre reactions. 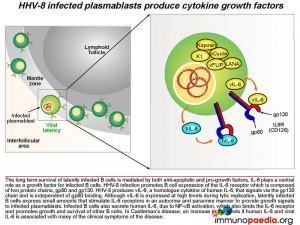 The long term survival of latently infected B cells is mediated by both anti-apoptotic and pro-growth factors. IL-6 plays a central role as a growth factor for infected B cells. HHV-8 infection promotes B cell expression of the IL-6 receptor which is composed of two protein chains, gp80 and gp130. HHV-8 produces viral IL-6 (vIL-6), a homologue cytokine of human IL-6.  vIL-6 signals through the gp130 chain, but does not need to bind to gp80 to activate cells. Although vIL-6 is expressed at high levels during lytic replication, latently infected B cells express low levels which stimulate the IL-6 receptor (IL6R or CD126) in an autocrine and paracrine manner to provide growth signals to the infected plasmablasts. Infected B cells also express human IL-6, due to NF-kB activation, which binds the IL-6 receptor and promotes survival and polyclonal B cell proliferation and increased immunoglobulin production. In our case study, the increase in the levels of human IL-6 and vIL-6 in the patient gives rise to his presenting symptoms i.e. fever, malaise, wasting, lymphadenopathy and hepatosplenomegaly. 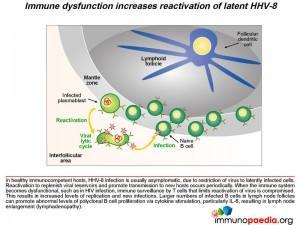 In healthy immunocompetent hosts, HHV-8 infection is usually asymptomatic, due to immune control of virus infected cells. Reactivation to replenish viral reservoirs and promote transmission to new hosts occurs periodically, but is limited. However, when the immune system becomes dysfunctional, such as in HIV infection, immune surveillance by T cells and subsequent ability to limit reactivation of virus is compromised. This results in increased levels of replication and infection of more B cells. Larger numbers of infected B cells in lymph node follicles can promote abnormal levels of polyclonal B cell proliferation via cytokine stimulation, particularly IL-6 as discussed above, with resulting lymphoid hyperplasia.

Polyclonal B cell proliferation associated with Castleman’s disease is mediated by increased levels of IL-6. Immune dysfunction results in increased reactivation of latent virus reservoirs which in turn increases levels of viral latent infected cells as well as lytic replication. Latently infected plasmablasts that localise to the mantle zone produce vIL-6 as well as human IL-6. Although human IL-6 is a more potent activator of the IL-6 receptor, viral IL-6 only needs to engage the gp130 chain of the receptor to induce signaling.  Gp130 is expressed on a wider range of cells than the full IL-6 receptor (gp130 and gp80), and in particular on endothelial cells.
vIL-6 activation of endothelial cells 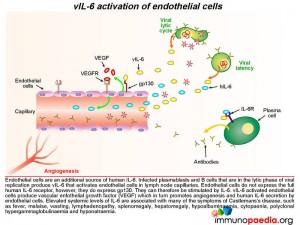 Thus vIL-6 can activate endothelial cells via gp130 binding, which then produces vascular endothelial growth factor (VEGF), which stimulates angiogenesis and further production of human IL-6.  These elevated systemic levels of IL-6 are then associated with many of the symptoms of Castlemans’s disease.