Once you have read this section you will be familiar with the 4 main types of hypersensitivity reactions that can be produced by the immune system. You will understand and be able to distinguish between the mechanisms of damage involved in each reaction and the time taken for these reactions to occur. We have also provided you with the common clinical conditions associated with each type of hypersensitivity reaction.

Type 1 – Immediate (or atopic, or anaphylactic) 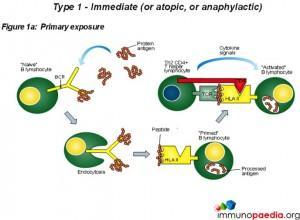 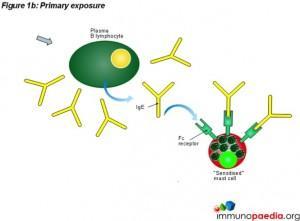 Type 1 hypersensitivity reaction is an allergic reaction provoked by re-exposure to a specific type of antigen referred to as an allergen. The reaction may be either local or systemic. Symptoms vary from mild irritation to sudden death from anaphylactic shock. Treatment usually involves epinephrine, antihistamines and corticosteroids.

Exposure may be by ingestion, inhalation, injection, or direct contact.  The ‘naïve’ b lymphocytes become primed and differentiate into an antibody–secreting cell and this leads to class-switching of the antibody to the IgE class (See figure 1a).

The difference between a normal immune response and a type I hypersensitivity response is that plasma cells secrete IgE. This class of antibodies binds to Fc receptors on the surface of tissue mast cells and blood basophils. Mast cells and basophils coated by IgE are “sensitised” (See figure 1b).

Later exposure to the same allergen, cross-links the bound IgE on sensitised cells resulting in degranulation and the secretion of pharmacologically active mediators such as histamine, leukotriene, and prostaglandins that act on the surrounding tissues. The principal effects of these products are vasodilation and smooth-muscle contraction (See figure 1c).

Some examples of type 1 hypersensitivity: 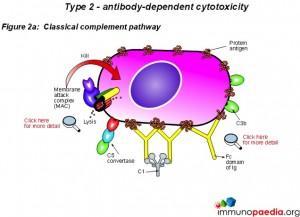 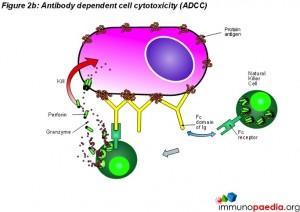 In type 2 hypersensitivity reactions, the antibodies produced by the immune response bind to antigens on the patient’s own cell surfaces. The antigens recognised in this way may either be intrinsic (“self” antigen, innately part of the patient’s cells) or extrinsic (absorbed onto the cells during exposure to some foreign antigen, possibly as part of infection with a pathogen).

IgG and IgM antibodies bind to these antigens to form complexes that activate the classical pathway of complement activation, for eliminating cells presenting foreign antigens (which are usually, but not in this case, pathogens). That is, mediators of acute inflammation are generated at the site and membrane attack complexes cause cell lysis and death. The reaction takes hours to a day

Phagocytosis of the cell can be mediated by phagocytes expressing Fc receptors.  These Fc receptors recognise surface bound antibody and complement receptors, that recognise surface bound complement protein. These cells are also recognised by macrophages or dendritic cells which act as antigen presenting cells, this causes a B cell response where antibodies are produced against the foreign antigen. An example here is the reaction to penicillin, where the drug can bind to red blood cells causing them to be recognised as different.  B cell proliferation will take place and antibodies to the drug are produced.

Another form of type 2 hypersensitivity is called Antibody Dependent Cell Mediated Cytotoxicity (ADCC). Here, cells exhibiting the foreign antigen are tagged with antibodies (IgG or IgM). These tagged cells are then recognised by Natural Killer (NK) cells and macrophages (recognised via IgG bound to the cell surface receptor, CD16 (Fc?RIII)), which in turn kill these tagged cells (See figure 2b).

This is an additional type that is sometimes used as a distinction from Type 2 reaction.

These reactions occur when IgG class antibodies directed towards cell surface antigens have a stimulating effect on their target. Instead of binding to cell surface components, the antibodies recognise and bind to the cell surface receptors, which either prevents the intended ligand binding with the receptor or mimics the effects of the ligand, thus impairing cell signalling.

In type 3 hypersensitivity reactions, insoluble immune complexes (aggregations of antigens and IgG and IgM antibodies) form in the blood and are deposited in various tissues (typically the skin, kidney and joints) (See figure 3a). 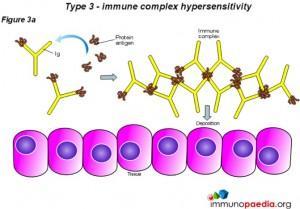 This deposition of the antibodies may trigger an immune response according to the classical pathway of complement activation – for eliminating cells presenting foreign antigens (which are usually, but not in this case, pathogens). There are two stages relating to the development of the complexes, firstly the complex forms when IgG and IgM antibodies are bound to an antigen, after this, the complexes can form larger ones which can be cleared by the body. It is at the first stage of this formation where clearance is not possible and the antigen-antibody complex will spread and deposit as stated above. The reaction takes hours to days to develop (See figure 3b). 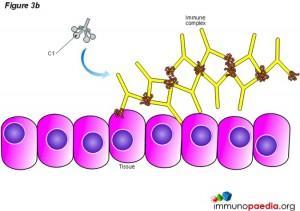 Tissue damage results at the site of the immune complex with the influx of phagocytes and granuloctyes and the release of inflammatory mediators (See figure 3c). 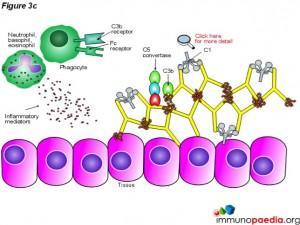 The Arthus reaction was discovered by Arthus in 1903. Arthus repeatedly injected horse serum subcutaneously into rabbits. After four injections, he found that there was edema and that the serum was absorbed slowly. Further injections eventually led to gangrene.

The Arthus reaction involves the in situ formation of antigen/antibody complexes after the intradermal injection of an antigen. If the animal/patient was previously sensitised (has circulating antibody), an Arthus reaction occurs. This manifests as local vasculitis due to deposition of immune complexes in dermal blood vessels. Activation of complement and recruitment of PMNs ensue which results in an inflammatory response.

Type 4 hypersensitivity reactions are often called delayed type as the reaction takes two to three days to develop. Unlike the other types, it is not antibody mediated but rather is a type of cell-mediated response.

CD8+ cytotoxic T cells and CD4+ helper T cells recognise antigen in a complex with either type 1 or type 2 major histocompatibility complex. The antigen-presenting cells in this case are macrophages which secrete IL-1, which stimulates the proliferation of further CD4+ T cells (See figure 4a). 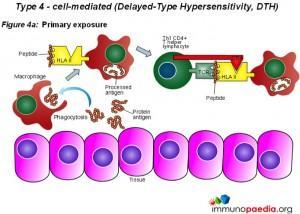 Re-exposure to the allergen results in a Th1 mediated response which stimulates the proliferation of the allergen-specific memory Th1 CD4+ T helper lymphocyte via recognition of complexes of peptide on antigen presenting cells (APCs) (See figure 4b). 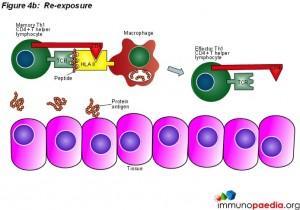 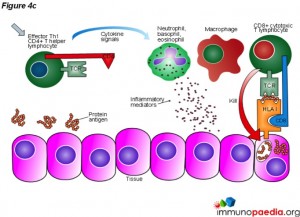