Epstein-Barr virus (EBV) or human herpesvirus 4, is a B lymphotropic gamma-herpesvirus that infects more than 90% of the world’s population. The most common manifestation of primary infection with this organism is acute infectious mononucleosis, a self-limiting clinical syndrome that most frequently affects adolescents and young adults. Classic symptoms include sore throat, fever and lymphadenopathy that may, or may not, be accompanied by a faint generalized maculopapular rash. Humans are the only known reservoir of EBV.

To better understand the pathophysiology of EBV infection that is occurring in our case, the following series of graphics explains both the normal activation pathway of B cells when stimulated by antigen and the mechanism by which EBV drives naïve infected B cells to recapitulate this pathway.

We also explain the immunological events that occur in X-linked lymphoproliferative disease (XLP), a rare primary immunodeficiency in which sufferers have a selective inability to control EBV infection and which we speculate is the likely cause of the patient’s condition in our case study. 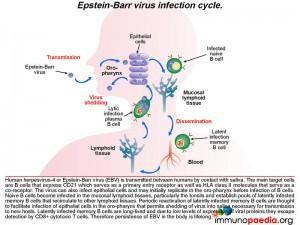 After exposure, EBV establishes a persistent infection in the host and is intermittently shed in oropharyngeal secretions.  In uncomplicated EBV infections the main target cells are B lymphocytes that express CD21 which, along with HLA class II molecules, serve as the viral entry receptor and co-receptor, respectively. The virus can also infect epithelial cells and may initially replicate in the oropharynx before infecting B cells. Naive B cells become infected in local lymphoid tissue, most often Waldeyer’s tonsillar ring, and establish latent infected memory B cell pools that migrate to other lymphoid tissues. Periodic reactivation of latently infected memory B cells are thought to facilitate infection of epithelial cells in the oropharynx that permits shedding of virus into saliva for transmission to new hosts. Latently infected memory B cells are long-lived and due to low levels of expression of viral proteins they escape detection by CD8+ cytotoxic T cells. Therefore persistance of EBV in the body is life-long. 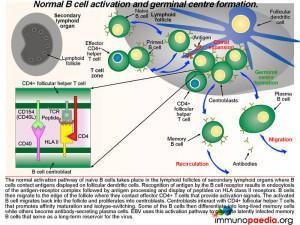 What happens in the lymph nodes

The normal activation pathway of naive B cells takes place in the lymphoid follicles of secondary lymphoid organs where B cells contact antigens displayed on follicular dendritic cells. Recognition of antigen by the B cell receptor results in endocytosis of the antigen-receptor complex followed by antigen processing and display of EBV-derived peptides on HLA class II molecules. B cells then migrate to the edge of the follicle where they contact effector CD4+ T cells that provide activation signals. The activated B cell migrates back into the follicle and proliferates into centroblasts. Centroblasts interact with CD4+ follicular helper T cells that promotes affinity maturation and isotype-switching. Some of the B cells differentiate into long-lived memory cells while other become antibody-secreting plasma cells. Epstein-Barr virus uses this activation pathway to generate latently infected long-lived memory B cells that serve as a life-long reservoir for the virus. Take note in graphic 2 of the box insert. This shows the receptor-ligand interactions that occur between the B cell centroblast and the CD4+ T cell (which is a follicular helper T cell). There are many more interactions, not shown, but the two important ones are the TCR-peptide-HLA complex and the CD40-CD40 ligand (CD154) interaction.

Lets look a little closer at some of the molecular events occurring in a B cell once it becomes infected with EBV. After infection of naive B cells, EBV expresses a set of latency-associated genes.  The function of these genes is to immortalize the infected cell.   These genes encode for two key proteins: Latent Membrane Protein-1 (LMP1) and Latent Membrane Protein 2A (LMP2A).  LMP1 is a viral homologue of CD40, which allows activation of B cells without the need to engage with CD40L on the CD4+ T cell. Thus, LMP-1 expression mimics CD40-CD40L signal transduction and bypasses the need for CD4+ T cell help.

LMP2A is a B cell receptor homologue.  It mimics B cell receptor signaling and coupled to LMP1 signaling promotes the B cell to undergo affinity maturation, isotype switching and differentiation into memory and effector B cells. After initial expansion, EBV-infected B cells become quiescent memory cells and viral gene expression is kept to a minimum. In fact, healthy EBV-infected individuals carry a number of these memory cells for life, and they function as a reservoir from which virus can reactivate periodically and be shed in the oropharynx.

EBV infection of B cells generates a subset of cells that are actively producing infectious virus particles. This is the lytic cycle and these cells are readily killed by CD8+ T cells due to recognition of HLA class I receptors with bound viral peptides. This is shown in graphic 4, with the box insert. During infectious mononucleosis there is a large expansion of EBV-specific CD8+ cytotoxic T lymphocytes that eliminate virus producing B cells.

After the initial expansion of B cells, driven by LMP1 and LMP2A, latent infection of memory B cells is associated with a lack of expression of viral proteins and the ability to escape detection by CD8+ cytotoxic T lyphocytes and and hence these cells persist as a reservoir of EBV. The lytic cycle can be induced again in latently infected B cells by triggering of the B cell receptor. This occurs periodically to facilitate shedding of virus in saliva and allow transmission to new hosts. 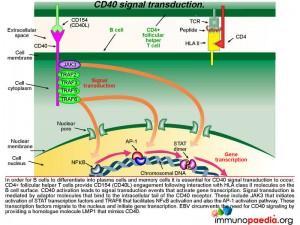 Lets look still closer at the detail of the molecular events when CD40 is activated by CD40 ligand (CD154). This is an important step that allows B cells to differentiate into plasma cells and memory cells as well as promote affinity maturation and isotype switching. CD4+ T cells provide CD154 engagement following interaction with HLA class II molecules on the B cell surface. CD40 activation leads to signal transduction events that activate gene transcription. Signal transduction is mediated by adaptor molecules that bind to the intracellular tail of the CD40 receptor. These include JAK3 that initiates the STAT transcription factor activation and TRAF6 that facilitates NFkB activation and also the AP-1 activation pathway.  These transcription factors migrate to the nucleus and initiate gene transcription. EBV hijacks this process by mimicking CD40. Lets see how this is done. 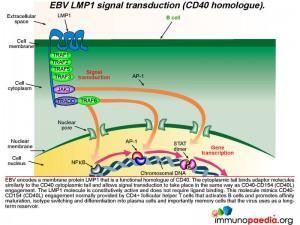 How does LMP1 serve as a CD40 homologue ?

Epstein-Barr virus encodes a membrane protein called LMP1 that is a functional homologue of CD40. The cytoplasmic tail of LMP1 binds the same adaptor molecules as the CD40 cytoplasmic tail and allows signal transduction to take place in the same way as if CD40 engagement had occurred. The LMP1 molecule is constitutively active and does not require ligand binding. This molecule mimics the CD40-CD154 engagement normally provided by CD4+ T cells to activate B cells and allow differentiation into plasma cells and importantly memory cells that the virus uses as a reservoir.

As already described, naive B cells interact with antigen displayed on follicular dendritic cells in the germinal centres of secondary lymphoid organs via their B cell receptors. The B cell receptor mediates signal transduction events via another set of adaptor molecules that attach to the alpha and beta chains that associate with the B cell receptor. These adaptor molecules include LYN and SYK. SYK activation leads to activation of phospholipase C gamma-2 that generates IP3 and DAG. IP3 induces calcium influx that initiates gene transcription through a series of molecular interactions. Graphic 7 shows the details of this interaction.

The important point about EBV, is that it encodes a homologue of the B cell receptor: LMP2A.

How does LMP2A serve as a B cell receptor homologue?

The LMP2A signal coupled with LMP1 signaling thus bypasses the need for antigen stimulation and CD4+ T cell help and permits the B cell to differentiate into memory B cells containing latent EBV.

LMP2A also blocks the B cell receptor from activation by antigen because this can initiate the lytic cycle and allow detection by the immune system. LMP2A achieves this by sequestering LYN and SYK adaptor molecules and additionally accelerating their destruction via the ubiquitin degradation pathway since the cytoplasmic tails also recruit ubiquitin enzyme complexes. 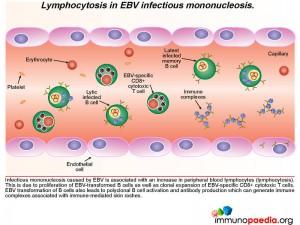 In the clinical work-up of our patient, the full blood count showed an elevated WBC and lymphocyte count indicating lymphocytosis, which possibly suggests proliferation of EBV-transformed B cells as well as clonal expansion of EBV-specific CD8+ cytotoxic T cells.  EBV viraemia, which was very high in the patient, can lead to an accumulation of immune complexes, which are associated with immune mediated rashes – seen in our patient as a faint, generalized maculopapular rash. 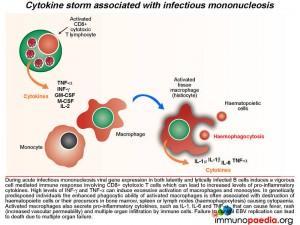 During acute infectious mononucleosis viral gene expression in both latently and lytically infected cells induces vigorous cell mediated immune responses, which can lead to increased levels of pro-inflammatory cytokines and a cytokine storm. High levels of INF-g and TNF-a can induce excessive activation of macrophages and monocytes. In genetically predisposed individuals, the enhanced phagocytic ability of activated macrophages is often associated with destruction of haematopoietic cells or their precursors in bone marrow,  spleen and lymph node(haemophagocytosis) causing cytopaenia. Activated macrophages also secrete pro-inflammatory cytokines, such as IL-1, IL-6 and TNF-a , that can cause fever, rash (increased vascular permeability) and multiple organ infiltration by immune cells. , Failure to control EBV infection can lead to death due to multiple organ failure – of which was seen in this case study. (see related case)

During acute infection, CD8+ T cells detect viral peptide antigens displayed on HLA class I on the surface of infected B cells. The interaction of the T cell receptor (TCR) with the EBV-derived peptide and HLA class I molecule leads to signal transduction in the CD8+ T cell. Additional activation signals are provided by signaling lymphocytic activation molecule (SLAM)-related membrane receptors NTB-A and 2B4 and their respective ligands NTB-A and CD48 when the membrane of the T and B cell make contact. Signal transduction is mediated by the SAP adaptor molecule that recruits FYNT and provides activation signals.

Boys with XLP often develop fatal massive hepatitis, haemophagocytosis, or a disseminated lymphoproliferative disorder triggered by primary EBV infection, but not by any other virus.  The gene for classic XLP is located on the long arm of the X chromosome at Xq25. This locus is named SH2D1A and is also known as SAP. A deficiency of SAP thus blocks cytotoxic T cell responses to EBV-infected B cells. CD8+ T cells detect infected target cells by engagement of the TCR with HLA class I receptors on the cell surface. In EBV infection, because the target cell is a B cell, there are additional interactions of cell surface molecules such as the SLAM related receptors. B and T cells express many of these receptors, but NTB-A and 2B4 are important in mediating additional activation signals to the T cell when engaging with ligands NTB-A and CD48. Also, CD48 is upregulated on the surface of EBV-infected B cells. In XLP, the SAP adaptor protein that associates with the SLAM-related receptor is non-functional and fails to provide activation signals. It is thought that in the absence of SAP, the EAT-2 adaptor molecule associates with the SLAM-related receptors and this adaptor provides an inhibitory signal to the T cell and leads to  dysfunctional CD8+ T cell killing of infected B cells.

Thus EBV infected B cells are not killed in the acute stage of infection.  Virus replication and B cell proliferation then continues unchecked and multi-organ failure can occur following primary infection as a result of the ongoing cytokine storm.