Multiple myeloma is a malignancy of B cells, specifically plasma cells, which is caused by abnormal genetic changes in B cells activated in the post-germinal centre of secondary lymphoid organs. B cells express cell-surface receptors that recognise antigens displayed on follicular dendritic cells in the germinal centres and become primed. CD4 T cell help is then required for differentiation and maturation into antibody-producing plasma cells. In individuals predisposed to multiple myeloma, DNA damage can occur following activation of B cells in the germinal centre. Specifically, abnormal DNA recombination occurs during isotype switching and affinity maturation. This results in translocation of the heavy and/or light immunoglobulin genes to other chromosomes, which influence the regulation of oncogenes or cell-proliferation genes. This primary event generates a malignant phenotype, which can be followed by secondary genetic alterations such as loss or duplication of chromosomes or genetic mutations affecting the expression of tumour-suppressor genes or oncoproteins.

Following the maturation process and isotype switching, myeloma plasma B cells produce monoclonal antibodies, although non-secretory or light chain only forms are known. This can occur with any of the immunoglobulins, IgG being the most common, IgA and IgE occurring intermediately and IgD and IgM occurring rarely. We have provided a clinical case study (Case of enlarged hard tongue) that describes IgM gammopathy. 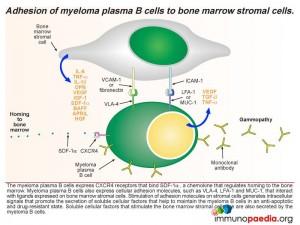 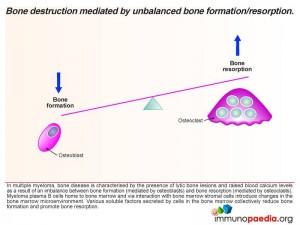 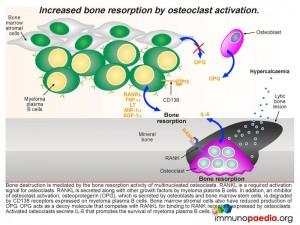 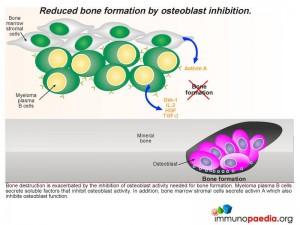 Myeloma plasma B cells constitutively produce monoclonal immunoglobulins resulting in a gammopathy, which can cause amyloidosis due to deposition of excess insoluble proteins. Myeloma plasma B cells migrate to the bone marrow. This homing is regulated by the chemokine stromal cell derived factor-alpha (SDF-1α) binding to the CXCR4 receptor, expressed on the myeloma plasma B cell. The myeloma plasma B cells also express cellular adhesion molecules, which interact with bone marrow stromal cell ligands. This interaction maintains myeloma B cells in an anti-apoptotic state and unresponsive to chemotherapeutic drugs. The accompanying bone disease is characterised by the presence of lytic bone lesions that result from an imbalance of bone formation, mediated by osteoblasts, and bone resorption, mediated by osteoclasts, which together remodel the bone microenvironment.

Bone destruction is a hallmark of the disease primarily driven by the activation of multinucleated osteoclasts. This is mediated by stimulation of RANK receptors by RANKL. In addition, the inhibitor of osteoclast activation, osteoprotegerin (OPG), is removed and degraded by CD138 which is expressed on myeloma plasma B cells, resulting in prolonged osteoclast activation. Furthermore, bone formation by osteoblasts is inhibited by soluble factors released by myeloma plasma B cells and the secretion of Activin A from bone marrow stromal cells.The process of bone resorption creates lytic bone lesions, which liberates calcium phosphates from the mineral bone matrix. This is measurable as hypercalcaemia and hyperphosphataemia. The increased number of plasma B cells in bone marrow can be identified from a bone marrow biopsy and are usually present at greater than 10% of the total cells: indicating a neoplastic condition. To confirm the diagnosis, multiple myeloma plasma B cells can be phenotypically characterized as CD38, CD138 and CD56 positive and negative for CD19, CD20 and CD21 expression. Genetic analysis to identify abnormal translocations, loss or duplication of chromosomes or mutations can also be used to confirm the diagnosis. Since this is a disease of post-germinal centre B cells which implies that the B cells have isotype-switched, the gammopathy usually involves IgG (most common), IgA and IgE monoclonal antibodies and rarely IgD and IgM.