SCID is a life-threatening syndrome of recurrent infections, diarrhoea, skin infections and failure to thrive that results from numerous molecular defects leading to severe T- and B-cell dysfunction and occasionally can affect natural killer (NK) cells. Without intervention, the T and B-cell dysfunction usually results in severe infection and death in children by age 2 years. Clinically, most patients present before age 3 months with unusually severe and frequent infections by common or opportunistic pathogens.  We will explore the mechanism and pathophysiology of SCID. It is first important to understand T and B-cells and the way in which they generate immunological diversity in a normally functioning immune system. All mechanisms described here are carefully illustrated in stepwise graphics to assist with understanding the processes described.

How is diversity normally generated in T and B cells? 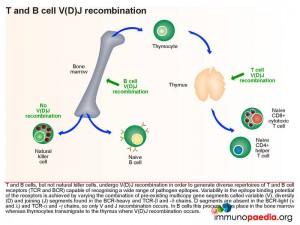 T and B cells, but not NK cells, undergo V(D)J recombination in order to generate diverse repertoires of T and B cell receptors (TCR and BCR) capable of recognising a wide range of pathogens. This is achieved by each TCR and BCR being highly specific for small protein fragments derived from the pathogen. These small protein fragment are known as epitopes. As there are potentially an infinite number of epitopes, the TCR and BCR need to be adaptable and variable so that enough diversity is created to engage with each different epitope. Variability in the epitope binding potential of the receptors is achieved by varying the combination of pre-existing genes known as Variable (V), Diversity (D) and Joining (J) segments. BCR (B cells) variability takes place in the bone marrow and TCR (T cells) variability occurs in the thymus. Variability and generation of diversity occurs by V(D)J gene recombination in the different anatomical locations. Expression of these recombined genes in the B cell makes up the protein structure of the BCR-heavy chain and in the T cell makes up the TCR-b and -d chains. Diversity (D) segments are absent in the BCR-light (k and l) and in the TCR-a and -g chains, so only V and J recombination occurs for these proteins. 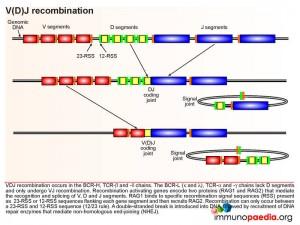 VDJ recombination occurs in the BCR-H, the TCR-b and -d chains, whilst only VJ recombination occurs in the BCR-L (k and l) and TCR-a and -g chains. Gene recombination can occur because of Recombination Activating Genes that encode two enzymes: RAG1 and RAG2.  These mediate the binding and splicing of V, D and J segments. RAG1 binds to specific recombination signal sequences (RSS) present as 23-RSS or 12-RSS sequences, which flank each gene segment, and then recruit RAG2. Recombination can only occur between a 23-RSS and 12-RSS sequence (which is called the 12/23 rule). A double-stranded break is introduced into DNA followed by recruitment of DNA repair enzymes that mediate Non-Homologous End-Joining (NHEJ). Recognition and end-binding is mediated by proteins Ku70, Ku80 which recruit DNA-PKcs.

What happens during SCID?

When defects occur in the recombination process certain types of severe combined immunodeficiency (SCID) conditions occur, where T and B cells are defective. NK cells are left intact, as NK receptors do not undergo V(D)J recombination. 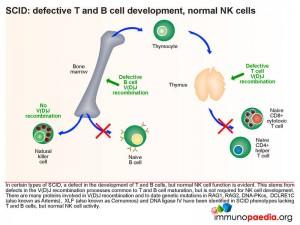 There are many proteins involved in V(D)J recombination and to date genetic mutations in RAG1, RAG2, DNA-PKcs, DCLRE1C (also known as Artemis), XLF (also known as Cernunnos) and DNA ligase IV have been identified in the SCID phenotype that result in a lack of T and B cells, but with normal NK cell activity. The most common mutation is seen in RAG1 and RAG2. 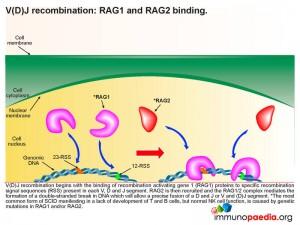 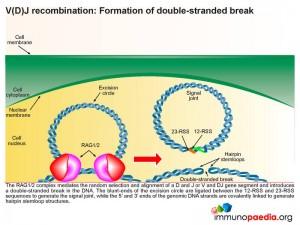 Following recognition and binding of the DNA ends, recruitment of proteins FEN1, DCLRE1C (also known as Artemis), TdT and PNKP occurs. DCLRE1C mediates nicking of the hairpin structures at random nucleotides while TdT adds random nucleotides to the 3’-OH. This process provides an additional mechanism of introducing variability into the coding regions of the TCR and BCR known as junctional diversity. Following end-processing, DNA polymerases m and l are recruited to fill in single-stranded gaps in the DNA strands.

DNA polymerization is then followed by a final ligation of the 3’-OH and 5’-P ends which require recruitment of proteins XRCC4, XLF (also known as Cernunnos) and DNA ligase IV. V(D)J recombination is then completed when a functional V(D)J coding joint has been created. 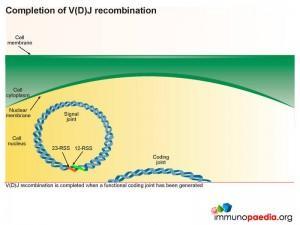 Worth noting is that in certain rare forms of SCID, with defects in T and B cell development, the genetic mutations in the affected proteins may permit partial enzymatic activity, which is then known as “leaky” SCID. This restrictive V(D)J recombination permits the development of a limited repertoire of T and B cells which can be directed towards self-antigens leading to an autoimmune response, known as Omenn’s syndrome. 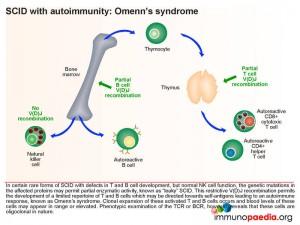 It has been reported in Omenn’s syndrome that clonal expansion of activated T and B cells occurs and that blood levels of these cells may appear within normal ranges, or be elevated. Closer examination the TCR and BCR in these patients reveal them to be oligoclonal in nature. Oligoclonal refers to there only being very few BCR or TCR types because there is an inability to undergo complete V(D)J recombination, and the result is translated to a limited recognition of epitopes. This is extremely dangerous for the patient as this indicates that there is not enough BCR or TCR diversity to interact with the array of epitopes required to mount an effective immune response, but also because the epitopes recognized tend to be directed to self (autoimmunity). The resulting clinical profile is immunodeficiency along with autoimmunity.