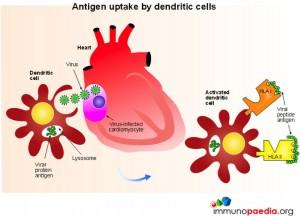 Myocarditis is an inflammatory disorder of the myocardium with necrosis of the cardiomyocytes and associated inflammatory infiltrate. It is usually caused by viruses which have tropism for myocardiocytes such as adenovirus and coxsackie B viruses. These viruses are therefore frequently associated with viral myocarditis. Myocarditis generally results in a decrease in myocardial function, with accompanying cardiac enlargement and an increase in the end-diastolic volume due to increased preload. Normally, the heart compensates for dilation with an increase in contractility, but because of inflammation and muscle damage, the heart is unable to respond to the increase in volume.

Dilated cardiomyopathy (DCM), is idiopathic in most cases and is a primary myocardial disorder characterised by cardiac enlargement and impaired systolic function of one or both ventricles. Despite conventional therapies for DCM the prognosis remains poor. There is increasing evidence that suggests that myocarditis and dilated cardiomyopathy are closely linked. Autoimmunity is one of the main mechanisms in the pathogenesis that links myocarditis to DCM.

Autoimmune myocarditis is thus thought to be precipitated by an initial infection with a pathogen, such as a virus, that expresses surface B-cell epitopes which are highly similar to host epitopes found on the cell surface of cardiomyocytes. This is known as molecular mimicry.