Our presenting case was a middle-aged man with severely indurated face presenting as a leonine facies as well as skin nodules and tumours on his trunk and limbs. He was previously diagnosed as HIV-infected and was initiated on ARV. It is uncertain whether the skin lesions were a result of drug toxicity following initiation of ARV, or possibly due to immune reconstitution inflammatory syndrome (IRIS). It is also possible this could be an aggressive progression of a pre-existing condition due to his immune-compromised state. We will look more closely at the immunology involved to understand the possible aetiology of this condition.

However, before understanding the pathology observed in our patient, it is important to first have a better knowledge of the immune response in skin to invading pathogens.

The primary immune response to foreign antigen in the skin:

Langerhans cells, which are resident dendritic cells in the epidermis, are typically the first innate immune cells to respond to an epidermal skin infection. 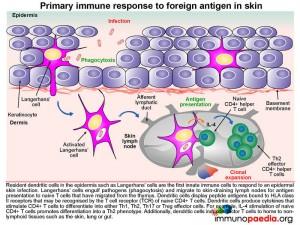 The Langerhans cells engulf pathogens via phagocytosis and migrate to draining lymph nodes where they present antigen to naive T cells (TN). TN cells are able to migrate to the skin-draining lymph nodes because they express homing receptors L-selectin and CCR7, enabling migration to secondary lymphoid tissues. Dendritic cells in the lymph node display processed peptide antigens (derived from the antigen inducing eczema, for example) in the groove of HLA class II molecules and will prime naive CD4+ T cells by virtue of the recognition of the HLA-peptide complex by the T cell receptor (TCR). The dendritic cells also produce various cytokines that facilitate the clonal expansion of the antigen-primed CD4+ T effector cells. Depending on the cytokine milieu, CD4+ T cells can differentiate into different functional subsets: Th1, Th2, Th17 or Treg effector cells.

The clonally expanded effector CD4+ T cells lose expression of lymph-node homing receptors and gain the expression of CLA and CCR4, which enable homing of the expanded CD4+ T cells to the skin.  Once antigen has been cleared, the clonally expanded CD4+ Tcell population pool then shrinks in size (known as constriction) by dying from apoptosis, leaving a smaller pool of long-lived memory CD4+ T cells.  These memory cells express the RO variant of CD45 and segregate into effector memory cells that express homing receptors to non-lymphoid tissues (in this case the skin) and central memory cells that express lymph node homing receptors. We will now look at effector memory and central memory T cells in more detail. 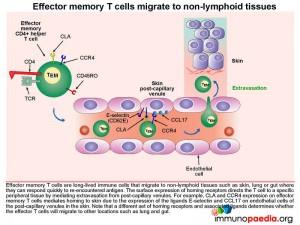 Homing of effector memory CD4+ T cells to the skin.

Effector memory CD4+ T cells (TEM) are long-lived immune cells that migrate to non-lymphoid tissues such as skin, lung or gut where they can respond quickly when they re-encounter antigen. The surface expression of homing receptors directs the cell to a specific peripheral tissue by mediating extravasation from post-capillary venules. For example CLA and CCR4 expression on the surface of effector memory CD4+ T cells mediates homing to skin. The ligands for CLA and CCR4 are E-selectin and CCL17, which are expressed on post-capillary venule endothelial cells in the skin. Additional CD4+ T cell stabilisation, once attached to the venule wall, occurs through the binding of T cell integrin molecules, LFA-1 and VLA-4, to endothelial cell ICAM-1 and VCAM-1 integrins 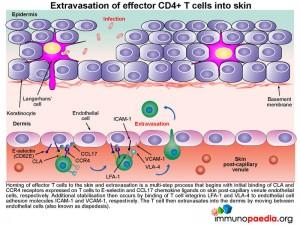 The effector CD4+ T cell then extravasates into the dermis by moving between endothelial cells. This process is known as diapedesis.

It is important to note that different sets of homing receptors and their respective ligands exist which determines whether effector CD4+ T cells will migrate to other locations, such as lung and gut tissue. 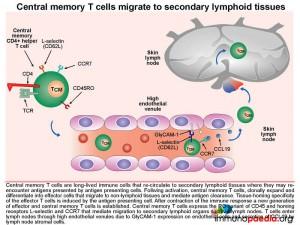 Central memory CD4+ T cells (TCM) are long-lived immune cells that re-circulate to secondary lymphoid organs where they may re-encounter antigens presented by antigen presenting cells such as macrophages and dendritic cells. These cells are especially important in the formation of long-term memory, most notably after immunisations.  Activated central memory CD4+ T cells can rapidly clonally expand after re-encounter with antigen and differentiate into effector cells that migrate to non-lymphoid tissues and mediate antigen clearance. Tissue-homing specificity is determined for effector cells by interaction with the antigen presenting cell,  ie. an antigen presenting cell that migrates from the skin to the lymph node that will program effector T cells to migrate back to the skin.  Central memory CD4+ T cells express the RO variant of CD45 and homing receptors L-selectin and CCR7 that mediate migration to secondary lymphoid tissues , such as lymph nodes. The CD4+ T cells will migrate back to lymph nodes through high endothelial venules, due to GlyCAM-1 expression on endothelial cells that bind T cell L-selectin and CCR7 that responds to secretion of the chemokine CCL19 by lymph node stromal cells. 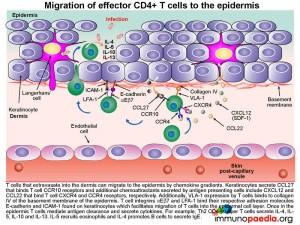 How do effector memory CD4+ T cells migrate to the epidermis.

The mechanism of how T cells first extravasate into the dermis and then migrate into the epidermal cell layer can be viewed as a three-step process:

What is happening in our patient?

Our patient was diagnosed with Sezary Syndrome (SS), which is a leukaemic variant of mycoses fungoides (MF) and affects approximately 5 percent of patients with MF.  MF is also the most common variant of cutaneous T-cell lymphoma (CTCL), representing 50 percent of all cases and is commonly initially misdiagnosed because of its resemblance to common benign skin conditions, including psoriasis and chronic dermatitis. This often results in the correct diagnosis being delayed for several years.

What happens in Sezary Syndrome?

MF and SS are the most common malignant proliferations of mature memory T lymphocytes, which render patients immunocompromised, even at the earliest stages of the disease. It is thought that chronic antigenic stimulation of T cells by foreign antigens in the skin leads to the malignant transformation and clonal expansion of Th2 CD4+ helper T cells. The underlying cause of the malignancy is uncertain, but a variety of genetic abnormalities have been identified and thought to interfere with apoptosis (natural programmed cell death) thus promoting immortalisation. Although the trigger in this patient is unknown, we postulate that CD4+ T cell transformation was most likely occuring at the time he was initially treated for adult onset eczema, 3 years before. An anti-tumour cell immune response controls the growth of malignant T cells in the early stages of disease, slowing down progression to more aggressive forms of malignancy. A breakdown of tumour immune surveillance caused by immunosuppression such as HIV infection or immunosuppressivedrug therapy may lead to development of advanced disease. 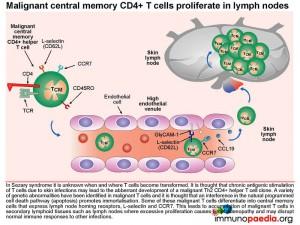 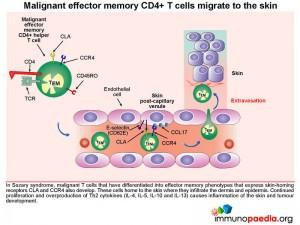 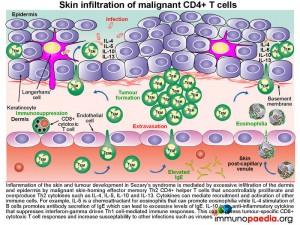 What happens to these transformed malignant CD4+ T cells?

Some of these malignant T cells have the phenotype of central memory cells that express lymph node homing receptors L-selectin and CCR7. This leads to accumulation of malignant T cells in secondary lymphoid tissues such as lymph nodes, where excessive proliferation causes lymphadenopathy and may disrupt normal immune responses to other infections. Additionally, malignant effector memory CD4+ T cells that express skin-homing receptors CLA and CCR4 will home to the skin where they proliferate and secrete cytokines. This results in inflammation of the skin and tumour development as was seen on the face, upper arms and thighs of this patient.

Such skin nodules, shown in the representative picture on the forearm are mediated by excessive infiltration of the dermis and epidermis by malignant skin-homing effector memory Th2 CD4+ helper T cells . These cells proliferate and secrete IL5, IL4 and IL10.

The interleukin IL-5 is a chemoattractant for eosinophils that can promote eosinophilia (our patient had an above normal eosinophil count); IL-4 stimulates B cells and promotes antibody secretion of IgE;  IL-10 is an anti-inflammatory cytokine that can suppress interferon-gamma driven Th1 CD4+ T cell-mediated immunity. Importantly, the strong Th2 response will inhibit CD8+ cytotoxic T cell responses that may have anti-tumourigenic properties and also increase susceptibility to intracellular infections, such as varicella virus causing chicken pox or varicella zoster skin infections.

How are Sezary Cells Identified?

From our discussion, it will be apparent that malignant T cells found in the blood of patients with Sezary Syndrome will show a particular pattern of cell-surface markers. These can be used to diagnose the condition using flow cytometry.  Central memory phenotypes are identifiable due to co-expression of CD45RO, L-selectin and CCR7. Effector memory phenotypes will co-express CD45RO with skin-homing receptors CLA, CCR4, aEb7 and CCR10 that, as discussed earlier, will mediate extravasation into the skin and migration into the epidermis.  The loss of surface markers CD5, CD7 and CD26 is also common.

CXCR4 also contributes to skin homing due to a loss of CD26.  This is a peptidase enzyme responsible for cleavage of the ligand CXCL12 (SDF-1). Upregulation of the killer cell immunoglobulin-like  receptor 3DL2 has also been documented- although it is unknown if this has functional significance. Because there is malignant clonal expansion of the CD4+ T cells, they will also express the same T cell receptor family, which can be used diagnostically to identify clonality.

The lymphocytes analysed in this patient were found to be predominantly CD4+ T cells with an aberrant loss of CD7. Although CD26 was not tested for on this patient a loss of CD5, CD26 and CD7 is characteristic of Sezary syndrome.

Drug toxicity and IRIS are unlikely to have been the cause for the observed T cell transformation as this would have preceded HAART. Rather, we postulate that chronic T cell stimulation by the underlying chronic eczema condition may have been responsible. While the patient’s cell mediated immunity was still good, an effective anti-tumour response prevented the tumour from developing into a more aggressive form. However, the chronic increase in IL-10 levels promoted by transformed Th2 cells and compromised host immunity due to HIV-1 infection led to disease by counteracting interferon-gamma driven Th1 responses. Th1 responses are required for successful tumour surveillance and in the absence of adequate immune control, a more rapid expansion of malignant T cells was seen. This consequently resulted in aggressive skin involvement due to the skin-homing properties of the malignant T cells.