The presentation of a Hypersensitivity Reaction

The incidence of ABC hypersensitivity, which occurs in 4-8% of users, predominantly affects Caucasians and Asians while the risk among people of African descent is unknown and is approximately 2% in African Americans. Typically almost all abacavir hypersensitivity reactions occur within the first 4-6 weeks of therapy and are reversible with discontinuation of use, however failure to recognize the reaction has been associated with fatalities when therapy was continued despite progressive symptoms.

ABC hypersensitivity involves a host of general non-specific signs and symptoms including fever, nausea, vomiting, diarrhoea, rash, sore throat, malaise and non productive cough, as observed in our case study. In contrast to the more prominent rash that can develop with sulfonamides or non-nucleoside reverse transcriptase inhibitors (NNRTIs), the rash associated with ABC is often mild and not the predominant symptom. Typically the constellation of symptoms associated with ABC hypersensitivity frequently mimic those of viral illnesses, such as influenza. A key component of ABC hypersensitivity is the accentuation of symptoms within hours of taking each dose of the drug and the escalation of symptoms with each subsequent dose.

Although much emphasis is placed on the importance of recognizing ABC hypersensitivity, it is also important not to overdiagnose and to obtain supporting empirical evidence. Of note, once ABC has been discontinued, because of presumed hypersensitivity, the patient cannot be treated with ABC again. Thus, when abacavir is discontinued prematurely or without adequate assessment of symptoms, therapeutic options may be lost. Therefore it is important that patients are assessed carefully for risk of developing ABC hypersensitivity prior to starting the regimen.

If hypersensitivity to ABC occurs, drug should be discontinued and supportive care provided. After withdrawal, symptoms usually resolve within a few days. 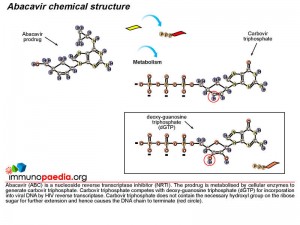 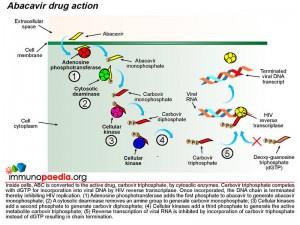 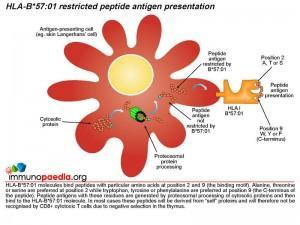 The role of HLA class I molecules is important in cell-mediated immunity since they function as antigen presenting molecules to CD8+ cytotoxic T cells. The source of the antigen is short peptide fragments of around 9-11 amino acids long derived from cytosolic proteins or in the case of dendritic cells they can be cross-presented on both HLA class I and II molecules via phagocytosed proteins. HLA class I genes occur at three genetic loci on chromosome 6 in humans (HLA-A, B and C) and a large number of allelic variants have been identified worldwide. HLA class I molecules encoded by different alleles primarily differ in their peptide binding specificity. It is known that HLA-B*57:01 molecules preferentially bind peptides with alanine, threonine or serine at position 2 while tryptophan, tyrosine or phenylalanine is preferred at the C-terminal position 9. Peptide antigens with these residues are generated by cleavage of cytosolic proteins by the proteosome in the cytoplasm and imported into the endoplasmic reticulum where they bind to newly synthesised HLA-B*57:01 molecules that are exported via the Golgi body to the cell surface for presentation to CD8+ cytotoxic T cells. In most cases these peptides will be derived from “self” proteins and will therefore not be recognised by the T cell receptor (TCR) of CD8+ cytotoxic T cells due to negative selection in the thymus. In HIV-infected individuals who carry the HLA-B*57:01 gene and who are treated with abacavir, an autoimmune hypersensitivity reaction involving CD8+ cytotoxic T cells can develop. 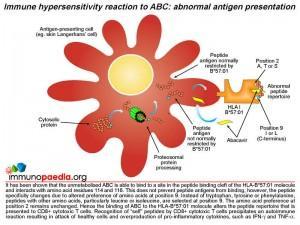 How is abacavir involved?

It has been shown that unmetabolised abacavir prodrug is able to bind to a site in the peptide binding cleft of the HLA-B*57:01 molecule and interacts directly with aspartate at position 114 and serine at position 116. The presence of abacavir does not prevent peptide antigens from binding to the HLA molecule, however, the peptide specificity is altered. A preference of other amino acids, particularly leucine and isoleucine, at position 9 instead of tryptophan, tyrosine or phenylalanine is evident. The amino acid preference at position 2 remains unchanged. Abacavir bound to HLA-B*57:01 molecules alters the peptide repertoire that is presented to CD8+ cytotoxic T cells. Many of the abnormal peptides that now bind HLA- B*57:01 are derived from “self” proteins. Recognition of “self” peptides by circulating CD8+ cytotoxic T cells precipitates an autoimmune reaction resulting in attack of healthy cells and overproduction of pro-inflammatory cytokines, such as IFN-gamma and TNF-alpha. 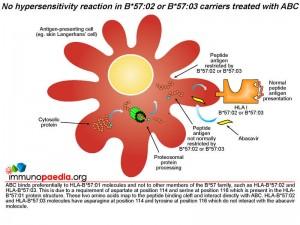 Does abacavir bind to other HLA-B*57 molecules?

What do the CD8+ cytotoxic T cells do that results in hypersensitivity?

The activated CD8+ T cells that are specific to drug-modified peptides derived from the protein-ABC conjugate have been shown to secrete gamma-interferon (IFN-g) and tumour necrosis factor-alpha (TNF-a), which are pro-inflammatory cytokines that contribute to the symptoms and severity of the immune hypersensitivity reaction. Gamma-interferon enhances antigen-presentation by upregulating the numbers of HLA molecules on antigen-presenting cells that could promote further activation of CD8+ T cells. It is noted that severe skin rashes develop in most hypersensitivity reactions and may relate to the large numbers of Langerhans’ cells present on the skin that may be participating in the activation of large numbers of CD8+ T cells responding to “self” skin antigens now presented by HLA-B*57:01 molecules. Large doses of TNF-alpa promotes fever and vascular permeability that can lead to sepsis and organ failure. Notably, it is thought that abacavir-specific CD8+ T cells are activated independently of CD4+ T cells, which is why patients who are severely immunocompromised with low CD4 counts can develop these reactions.