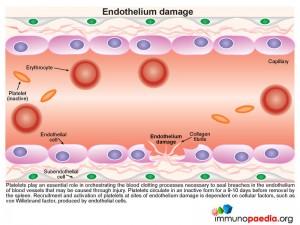 Thrombotic thrombocytopaenic purpura (TTP) is a pentad of neurological symptoms, pyrexia, renal dysfunction and microangiopathic haemolytic anaemia with thrombocytopaenia. The platelet microthrombi which form in the microcirculation are responsible for most symptoms seen in this condition due to resulting organ ischaemia. The endothelia of the kidneys, brain, heart, pancreas, spleen, and adrenal glands are particularly vulnerable to TTP. While the liver, lungs, gastrointestinal tract, gallbladder, skeletal muscles, retina, pituitary gland, ovaries, uterus,and testes are affected to a lesser extent. 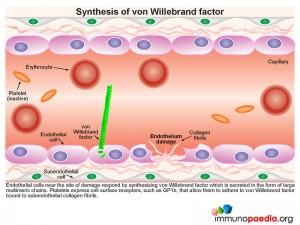 To better understand the pathophysiology of TTP it is important to first understand platelet function, the role of von Willebrand Factor (vWF) and the proteolytic enzyme ADAMTS13, when endothelium is injured. During this process platelets play an essential role in orchestrating the blood clotting processes necessary to seal breaches in damaged blood vessels.  Recruitment and activation of platelets at sites of endothelium damage is dependent on vWF, which is synthesized by endothelial cells. The endothelial cells located near the site of damage respond by producing vWF which is secreted in the form of llarge multimeric chains. 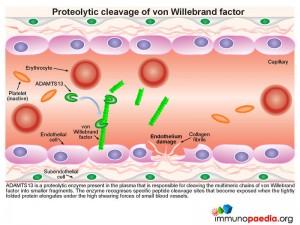 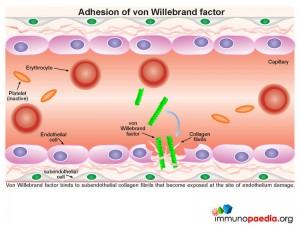 These factors contribute to recruitment of platelets to the site of endothelium damage and platelet aggregation that forms a seal in the breached endothelium. The platelets also initiates the blood clotting cascade that generates a meshwork of insoluble fibrin. 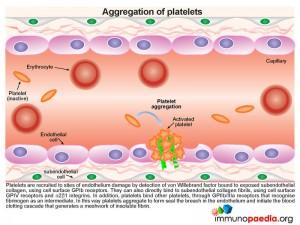 What is thrombotic thrombocytopaenic purpura (TTP)?
In TTP, the plasma-derived proteolytic enzyme ADAMTS13, that cleaves the large multimeric chains of von Willebrand factor into smaller fragments, is depleted due to the presence of an autoantibody. 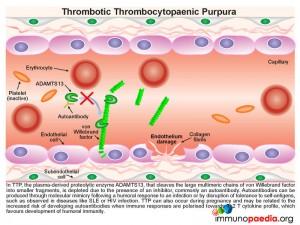 utoantibodies can be produced through molecular mimicry following a humoral response to an infection or by disruption of tolerance to self-antigens. This is observed in autoimmune diseases like SLE or during HIV infection. During HIV infection, there is both disruption of CD4+ T cell regulation and an increased risk of opportunistic infections. There is thus a greater likelihood of autoantibody generation through molecular mimicry. Because in this case, our patient was HIV infected, there was a strong likelihood that the action of ADAMST13 was inhibited, or neutralized, by the formation of autoantibodies.

In the absence of ADAMTS13 proteolytic activity, the large chains of vWF multimers are increased in the circulation and bind to exposed subendothelial collagen fibrils, initiating recruitment of large numbers of platelets to sites of endothelium damage. 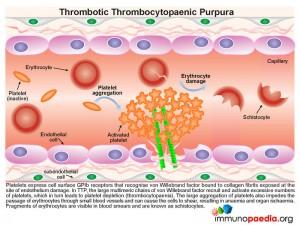 Platelet depletion or thrombocytopaenia
Impedence of red cells through small blood vessels causing cells to shear with a resulting             microangiopathic haemolytic anaemia (MAHA) and organ ischaemia
Fragments of erythrocytes are visible in blood smears and are known as schistocytes.

Treatment of TTP
The diagnosis of TTP is essentially a clinical diagnosis. Although not all 5 criteria listed in the pentad are always present, life saving treatment is often initiated on the evidence of MAHA alone. 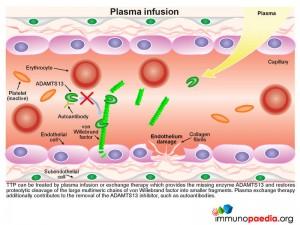 Rituximab Therapy
In some cases plasma infusion or exchange therapy fails to provide a long-term benefit. This is found where the inhibition of ADAMTS13 is due to the persistence of autoantibody producing B lymphocytes that are not removed by plasma treatment. In these circumstances treatment with rituximab should be considered. This is a CD20 binding monoclonal antibody that selectively binds to B lymphocytes and mediates their destruction. Removal of the source of the autoantibody, results in restoration of significant ADAMTS13 activity. 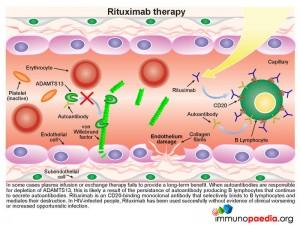