In the embryo, HSCs arise from mesoderm 1. Hemangioblasts from the yolk sac & pre-aortic region1 migrate first to the foetal liver and spleen, and eventually also to the bone marrow2. HSCs persistin niches within these organs throughout the lifespan 3, 4,5,6. In adults, it is mainly bone marrow haematopoiesis that replaces blood cells6. During inflammation, however,extra-medullary haematopoiesisin the liver and spleenbecomes relevant5, 6.

Bone marrow is located in the medullary cavities of axial and long bones 7.It is organised into cellular cords and vascular sinusoids within a meshwork of trabecular bone 6, 7. Local cells include adipocytes (~50%), HSCs, blood cells, mesenchymal stromal cells, endothelia, adventitial reticularcells, and cells of the endosteal lining, such as osteoblasts and nerves6, 7, 8.

Different marrow sub-compartments are specialised to support development of different blood cell types 7. These micro-environmental niches support and maintain HSC and their progeny, through complex intercellular relationships 6. HSCs occurperivascularly and are relatively rare, observable in murine marrow at a rate of about 1 per 106 cells 9. They are responsible for renewing their own population pool, as well as producing an estimated 1012 new blood cells daily 10.

The two major blood cell precursor lineages are myeloid and lymphoid. These give rise to all blood cell types, as well as platelets. 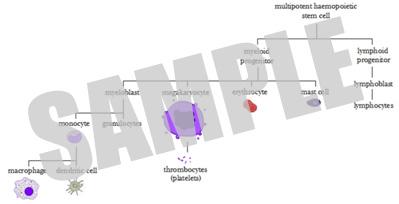 Dendritic cells (DCs) arise in the bone marrow during steady state,as well as from monocytes during inflammation. Classically, DCs and monocytes are thought of as innate cells derived from the myeloid lineage innate cells, but emerging evidence suggeststhey may arise from the lymphoid lineage as well10. This is in keeping with the role of mononuclear phagocytes as the functional links between innate and adaptive immunity10.

Since ~2/3 of hematopoiesis is devoted to myelopoiesis, granulopoiesis is an appropriate example of this signalling-based regulation. A molecule called PU.1 must be present for myeloid lineage commitment. The subsequent decision between granulocyte and monocyte commitment depends on the C/EBPα and PU.1 balance. High levels of PU.1 will lead to monocyte and B-cell formation, while high levels of C/EBPα (or IL-3 and GM-CSF) drive granulopoiesis. Neutrophil requirements are gauged mainly by the number of neutrophils present in peripheral tissues, via the rate of neutrophil apoptosis and phagocytosis. Higher rates of phagocytosis of apoptotic neutrophils lead to reduced mononuclear phagocyte production of IL-23 → reduced T-cell production of IL-17A → reduced G-CSF production → reduced mobilisation of bone marrow neutrophil reserves. G-CSF facilitatesneutrophil release from the marrow via down-regulating local chemotactic molecules which retain neutrophils.

Progenitor commitment to a certain lineage is controlled by humoral and local cell-surface signal molecules. The ultimate fate of any cell is determined by integration of all signals at a given time, to ensure appropriate provision of blood cells for a given systemic condition. Hamatopoiesis-stimulating factors are derived from local microenvironment cells, from distant activated leukocytes and non-immune cells with immune functions, and from cellular sources of hormones 7. Examples of such factors include granulocyte-colony stimulating factor (G-CSF), macrophage-colony stimulating factor (M-CSF), andinterleukin 2 (IL-2) for T-cell production and maintenance7.

Once leukocytes reach a certain stage of maturity, they traverse the venous sinus wall to enter the circulation 7.Myeloid-derived naive innate effector cells circulate, awaiting activation signals. Many are short-lived, and are removed and replaced if no activation signal is received.Lymphoid-derived adaptive cells, on the other hand, initially undergo further maturation prior to awaiting activation in the spleen and lymph nodes (collectively known as secondary lymphoid organs). B-lymphocytes mature in the bone marrow, after which they enter circulation to migrate to the spleen for further maturation. Thereafter, some remain in the spleen, while others migrate to the lymph nodes. In both thesesecondary lymphoid organ locations, B-cells await activation.

T-lymphocytes mature in the other primary lymphoid organ, the thymus. After maturation, they enter the circulation to colonise the spleen and lymph nodes and await activation. The thymus and secondary lymphoid organs are constantly seeded with new lymphocytes originating in the bone marrow. 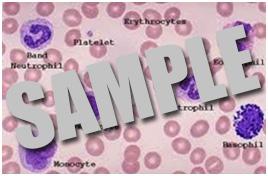 For more specific identification of leukocyte sub-populations, immunohistochemistry involves fluorescent tagging of unique surface markers (or combinations of markers) with monoclonal antibodies. This can facilitate, for example, fluorescence microscopy to localise leukocyteswithin a tissue section, analysis/sorting of cell phenotypes by flow cytometry, and, most recently, a new technology known as mass cytometry (where cells are tagged with metal isotopes rather than fluorescent tags).

Hematopoietic dynamics are responsible for the increases in circulating leukocyte populations during inflammation/infection (as reported by full blood counts and differentials), in order to meet demand. Bone marrow homeostasis – and thus haematopoiesis – can also be disrupted by, for example, malnutrition, malignant infiltration, and various pharmacological agents (e.g. methotrexate, ganciclovir, etc.). This can produce neutropenia, and lead to increased extramedullary haematopoiesis.